There’s three categories of races us runners group our efforts into: the “A” race, or the race we’ve been focused on since we started our current block of training (for me this would be the San Diego 100 in a few weeks). This is the race we taper for, we look forward to from the minute we hit “submit” on UltraSignup- we obsess over it and we want to do our absolute best at.

Then there’s the “B” race; this is the one where we will still go out and give our maximum effort but might not be as emotionally invested in, this is usually 5 to 8 weeks out from the big “A” race. I use these as a measuring stick; they tell me where I need to put my focus for the final block of training; whether it be hills, nutrition, etc. I race them hard but won’t kill myself if I don’t hit my goals.

Then there’s the “C” race. This is the race you do with buddies as a social thing, or the one you don’t taper for, or the one you either go out on a whim and do last minute or just use it to “get that distance in”, whatever.

This was Miwok 100k for me. I kind of felt like a dick using this  race as a “C” because there’s a lottery to get in (I guess I’m lucky to have gotten in this year?) but I was so looking past Miwok to the SD100 that everyone (even the voice in my own head) said “don’t race Miwok”. So, I basically used it as a $180 training run. And it was totally worth every penny. 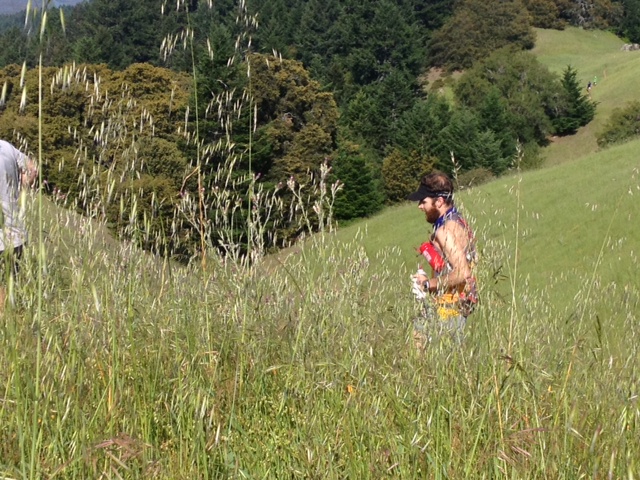 The goals I had in my head were really loose and forgiving; I wanted to go under 15 hours (to get that Western States qualifier) and I wanted to be able to run well after mile 50. That was pretty much it. Oh, and I wanted to have fun. If that meant running slowly in order to run with other people, so be it. I treated Miwok like a mobile party, and it didn’t disappoint.

I learned some cool things along the way, too. That it starts hurting around mile 23-25 (yeah, I already knew that) and progressively gets worse until mile 45. Then, it doesn’t get any worse. It just stayed there, at the same pain threshold. The last 17 miles were kind of blissful; except for a low spot at around mile 49, it was pretty awesome towards the end. I feel like I did some of my best running late in the run.

I fueled with Vespa and Vitargo all day, taking a Vespa every 3 hours (45 mins before the race, then at hours 3, 6 and 9) and took ~150 cals of Vitargo per hour for the first 3 hours then every 45 minutes until around hour 10, also had about 80 calories of UCan in there somewhere; thanks to the guy at Bridgeview aid for helping me pour that powder in my bottle, yes, it did look like cocaine! This is also where having a crew is so valuable; having to mix your own drinks is definitely a pain in the ass. I love my crew!

I hit a low point coming out of Tennessee Valley at mile 48, it was the only time in the race I wasn’t having fun (luckily it only lasted a few minutes). I was quickly pulled out of it by a combination of: a friend and her pacer ran by me and were “c’mon, man- run with us!” but I just couldn’t run right there; everything suddenly “sucked”, the weather (it was probably the nicest day of the year), the music I was listening to (Dick’s Picks Vol. 16, which is really awesome- a ’69 Fillmore show), my attitude went from super happy, flying into Tennessee Valley to pure crap in a span of 5 minutes.

I decided at this point, 10+ hours in that it was probably a good time as any to start with the sugar.

I put on The Hold Steady and was immediately pulled from my funk. I switched over to salted caramel Gu, eating just 4 in the last 2+ hours. Add to that some Mountain Dew (10 ounces or so), a little bit of salty boiled potatoes and a small piece of banana and that was it for the day. I was once again a happy camper and able to hammer away those final miles, in relative comfort and once again running happy.

I’m really psyched by my body’s ability to burn fat as my main fuel, and never came close to feeling bonky or shitty physically (just that one little mental low point). I started the race in a fasted state (only having had a cup of “bulletproof” coffee upon waking) and felt really good in the early going. Maybe it was the 2+ miles of single-track at the start that forced us mid-and-back of the pack folks to march up Matt Davis Trail the whole time that kept my legs fresh later in the race; maybe it was me constantly checking my Garmin and thinking “this pace is a bit too fast, I’m going to slow down a bit” (I really felt good about my ability and desire to control my pace); maybe it was all the miles leading up to the race; who knows?

At no point did I think “let’s race now”. At least not in the first 55 miles…

…then of course the ego kicks in a bit, like the whole “I do not want to get passed in the last 10 miles” thing is now controlling my legs. I’m also not sure if it’s the fact that at around 11 hours of being out there I just wanted to be done running. That may have had something to do with “finishing strong”. In my mind I ran “perfect” pacing, going 6:24 in the first half of the race and just about that in the second half.

Recovery has gone really well, I was back out running again on Monday after resting up Sunday. It’s been a month and change since Lake Sonoma 50 and twelve days since Miwok, and all I can say about how well my body has handled everything is astounding (I also think I’m kind of lucky, too).

I can’t say enough for proper sleep and a diet that works (for you). I found a nutrition plan that works really well for me; at least one that agrees with my digestive system, keeps inflammation at a minimum and allows me to both go hard when I need to and recover really fast after those harder efforts.

And again, I think I might just be lucky.