Hoka One One Speedgoat Review

I’ve only done one shoe review on here before but fear not, I am an expert on what works for me. Read that sentence again, please. I feel like every gear review needs to have that caveat posted somewhere just ahead of the comment section, because the internet is a terrible place. I’m putting it at the start to save you the trouble of an argument.

You might hate the Speedgoats. You might be the kind of person that hates to run very fast down hills. You might like to have foot problems. You might hate cushion, I don’t know you. I can’t begin to pretend that everyone likes to barrel down steep, technical descents and save their lower legs.

Because that’s basically what you’re getting with the Speedgoats. If you did click the link above, you’ll notice my only other shoe review was in fact my first pair of Hokas, the Rapa Nui 2 (trail version) shoes. The Speedgoats are basically an update of those phased-out Rapa Nuis, but with a much more aggressively lugged outsole on a nicer, sleeker upper. 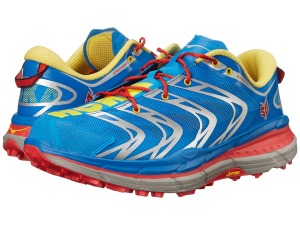 Holy crap, these are dope!

Add the winningest 100-mile runner ever (Karl Meltzer)’s nickname to them and you have Hoka’s first signature shoe, and it does not disappoint. I’ve seen the majority of reviewers just gush over the responsiveness and rebound of the cushion, the durability, the grip, etc. The majority of the detractors have complained about the narrowness of the toe box, and lucky for me my feet are narrow so I haven’t had a problem. So without any further ado, here’s the pluses and minuses of the Hoka One One Speedgoats.

All-in-all, a really great shoe. Once you get over the price ($140) and you realize you’ll have these for upwards of 600 miles, it’s a really good deal. If there’s one thing Hoka can do, it’s give you a shoe that will last. With the exception of the first version of the Cliftons (only 324 miles and they were done), I’ve put at least 500 miles on all my Hokas; the Bondi 3’s were good for 600+, two pairs of Rapa Nui’s (one trail and one tarmac), and the Clifton 2’s I’m in currently just hit 300 miles with a ton left to go. 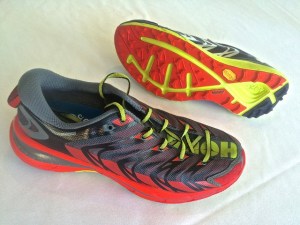 There’s other colors, too

If there’s anything slightly damning I can say about Hoka is that their first version of a shoe is never as good as the second- it’s almost as if they’re allowing their customers to beta test along with their pros, who are getting the shoes a good 6-9 months ahead of us. Which is kinda cool, but seeing as their cheapest model is $130 we’re both paying for their R&D and participating in it.

Anyway, here’s a quick rundown of what I just said:

I give these shoes a B+

…there’s room for improvement but altogether I think Hoka comes pretty close to a perfect shoe, and I’m thinking that the next iteration of these is going to be that much better.

Hope you liked my review, I’m going to be doing a lot more of these in the future.