The 2019 Manitou’s Revenge Race Report: I Can’t Do This Alone

You want the condensed version, fine: Manitou’s Revenge had its way with me. Again.

You want the pedantic version: okay then, buckle up kiddos. This is gonna be long…

My legs are wrecked- probably not the best of ideas to run Worlds End 100k three weeks before Manitou’s but hey- if it weren’t for terrible ideas would any one ever have tried to run an ultra? I feel like my wife knew this was gonna be a bad idea back in February. “Yeah but I ran Lake Sonoma 50 then Miwok 100k then San Diego 100 all in the span of like seven weeks…” and that was 5+ years ago. I am no longer that runner.

So what makes Manitou’s so special?

The RD, the volunteers, the organization, the trails, the views, the hikers, the runners, the crews and pacers- everything surrounding this race is just pure magic. That being said I can make something magical and beautiful into an unadulterated shit show.

First, I missed the bus from Phoenicia to the start line. When they say they’re leaving the parking lot at 3:30 AM that does not mean 3:32 when I arrived. To say I missed it is only a half truth- I had the luck of getting a ride from a runner’s wife to the school (the second parking area in Phoenicia). Yeah I was that guy that flagged the bus down and hopped on in the middle of the road. Little bit of foreshadowing to how my race was going to play out. Those who know me well would say this was perfectly on-brand.

So got up to the race start and saw the CT Mixers crew that was there- some of the raddest folks this side of anywhere; Ron, Stacey, Tom, Jay, Karen and Fred, you all are awesome.

Was both psyched and a little intimidated I got to start up in Wave 2, so I got to share some early miles with Jay, then realized on the first big descent of the day that I just could not run downhill and knew it was going to be a long day. 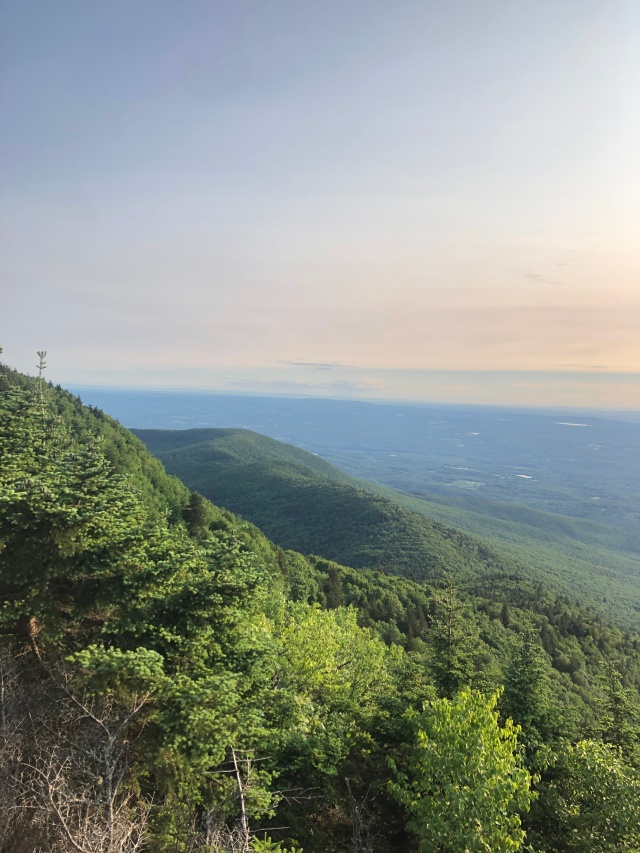 Between Blackhead and AS #2 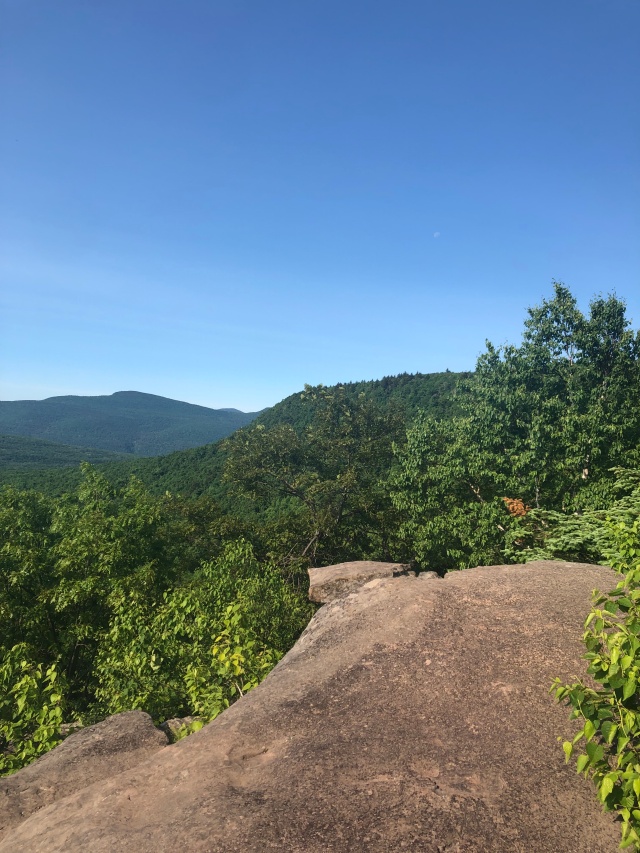 Figured I’d slow down and wait for Stacey who started a wave behind me, she’s gotta be coming up soon. Yep, right after the first aid station she’s coming up this climb with a huge smile. “Hey Jimmy I’m dropping!” No way. Yep. Can’t blame her- one of the most bad ass runners in all of Connecticut with absolutely nothing left to prove after destroying the course record at Connecticut’s premier 100-mile race The CUT 112 three weeks ago. She will never brag about how awesome of a runner she is because she’s such a great person so we can all do that for her.

We ran with my homey Scott who I had ran many miles with here two years ago and his awesome attitude (and best socks of the day by far) and we all stuck together going into North South Lake aid, said goodbye and good luck to Stacey as she starts the next chapter of life in Colorado.

I think I the next 14 miles were the worst of the day for me- nothing was more frustrating than getting to that descent into Palenville, the most runnable section of the day dropping 1800 feet in like four miles and I just sucked ass. Got passed by a train of bros into the aid station and thought “probably going to be running with a headlamp tonight.”

But I discovered early on that I could still climb well- so that next big one up from Route 23 I hammered and passed all those dudes back- only to be completely demoralized by like two miles of straight mud. The thought entered my head- drop at Platte Clove dude. You had a sick race at Traprock 50k, got your Western States qualifier at Worlds End, just end your season now.

Those thoughts were so pervasive and I hate that I had nothing to really counter them except for the fact that just because something hasn’t yet been proven false doesn’t necessarily make it true. I would basically stay in this race to prove that I wasn’t a dumbass, which is really dumb so it cancels out the idiocy… 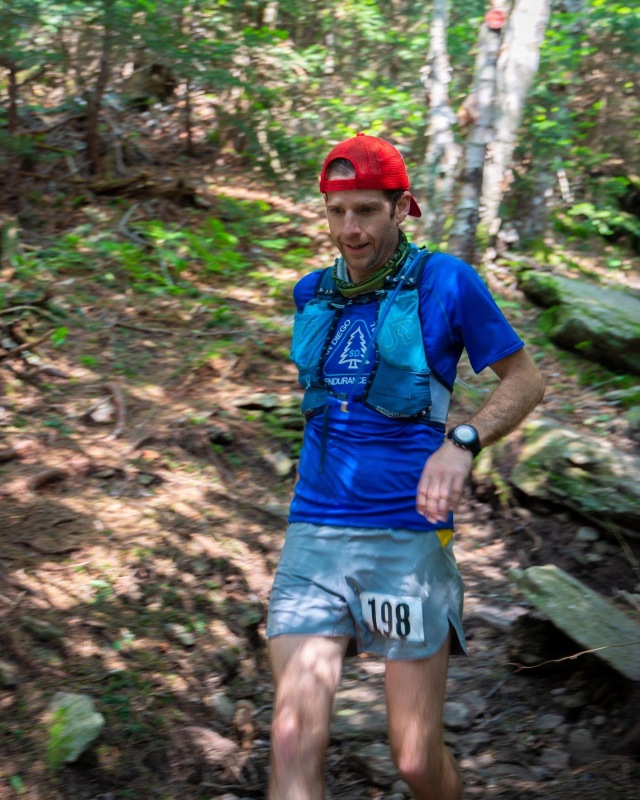 So after the mud on Kaaterskill it’s the same old story going down the next big descent into Platte Clove- just dudes running a train on me here, on-your-lefting the shit outta me.

My quads, knees, my IT bands? This shit has never hurt during a race- I’ve never had IT band problems in my life. Who’s fucking legs are these? Gonna pop an Aleve and walk it into the aid station and force some jolly over-caffeinated asshole to talk me out of dropping here.

Just then Tom rolls up on me as I’m trying to get the child-proof package open. I’m all, “Dude I can’t run downhill today.” He’s like whatever, we’re like a mile out from the aid, I’ll run with you. He basically paced me in there, obviously had much better legs than I and for that act of kindness I decided not to drop. I figured he was going on to just crush the day after checking on me.

Once we got in there T-Bak hopped into action and was the most epic on-the-spot crewman ever, I sat in a chäir, chugged a RedBull, basically kept repeating in my head “you can still have a good day” over and over.

Tom was like “you ready?” and we rolled outta there. I was surprised because Tom could still hammer and here he was waiting for me. I now had the resolve to finish this thing no matter what.

These were welcome early on, later not so much

For the next eight hours it would basically be Tom leading on the flats and descents and me leading on the climbs. It was all I had on the day and I had to use it, I’ve never climbed this well during a race. We just kept churning out the miles, runners coming and runners going- I literally had no idea how many runners passed us or runners we passed, it was all a daze. 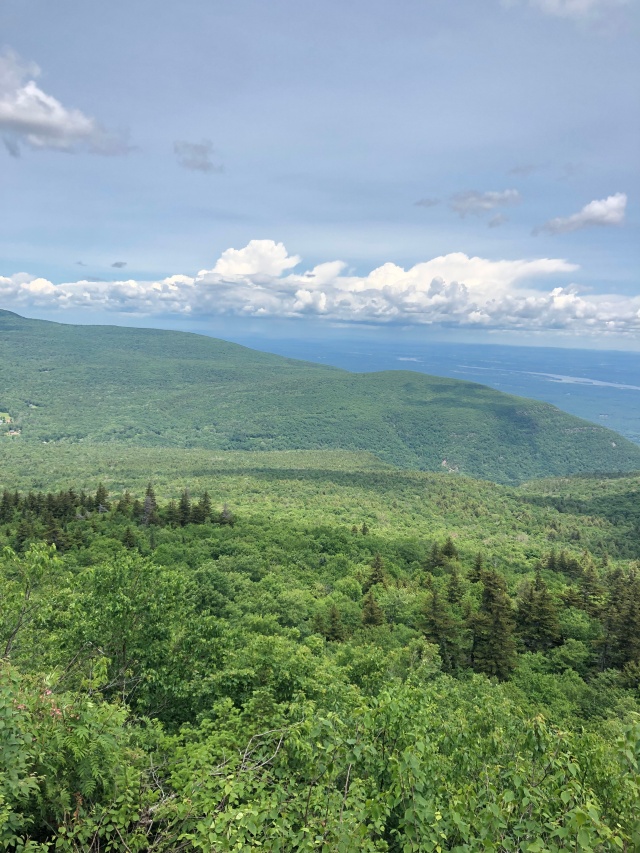 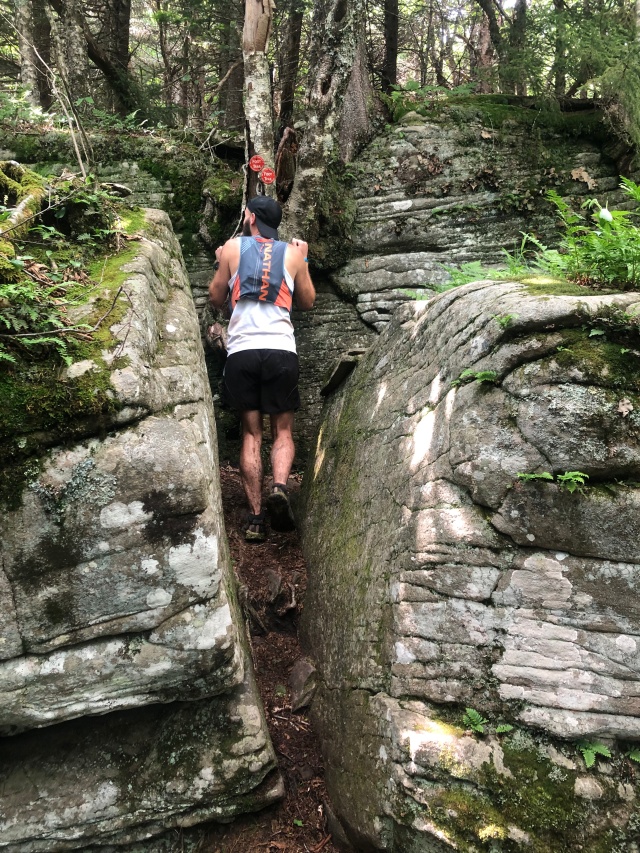 Tom shimmying up through this split in the rock 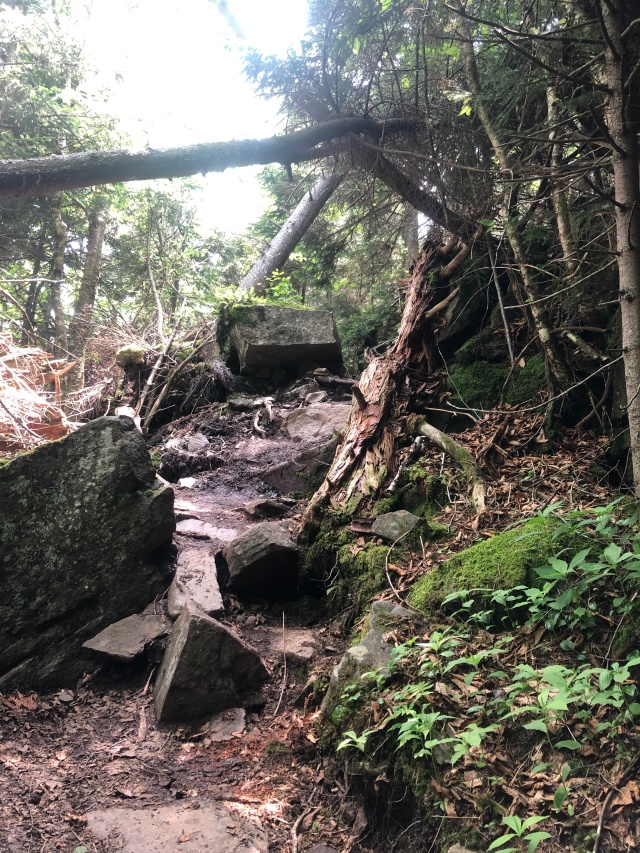 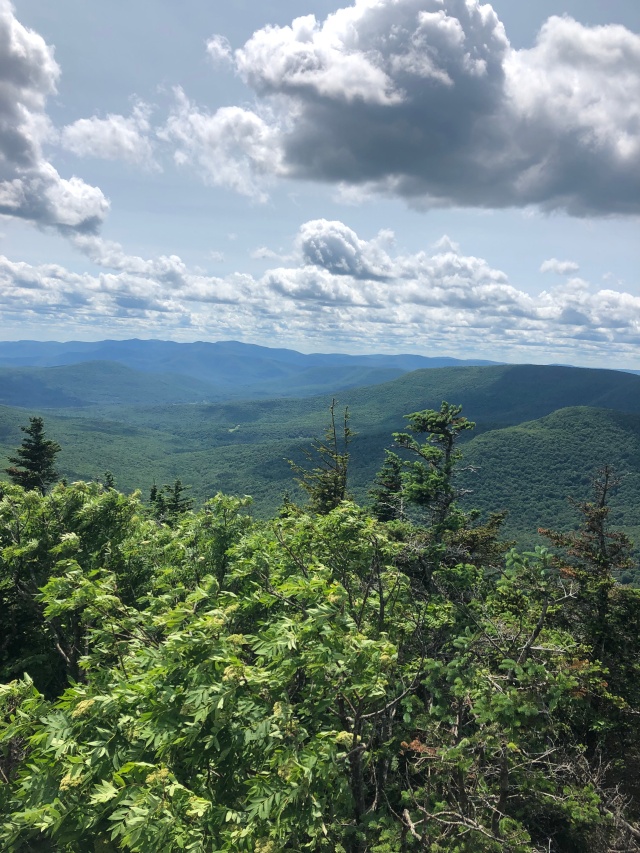 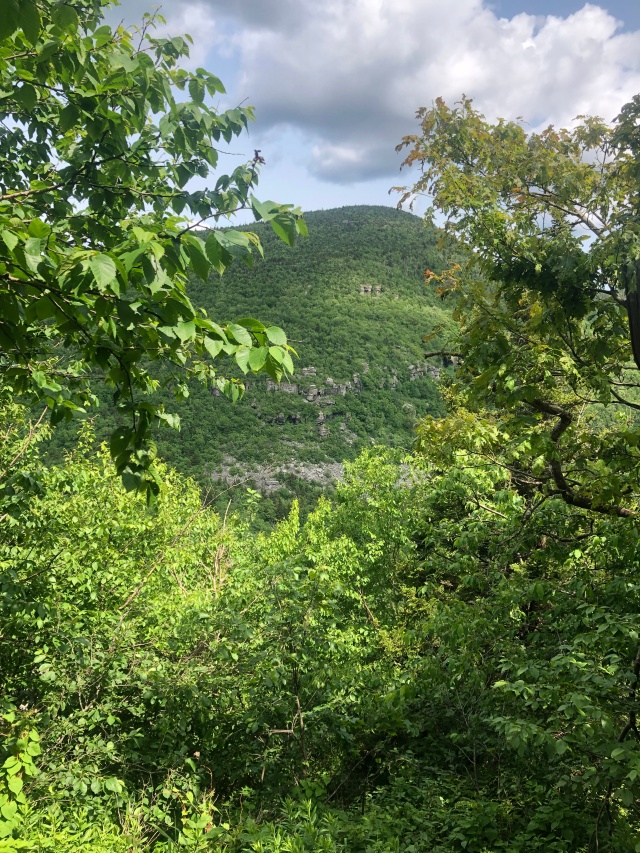 The aid stations were awesome- every single one was a sight for sore legs, filling up my pack, making me smile, indulging my shitty sense of humor, you guys were my everything. Straight up Kate Winslet on the bow of the Titanic shit today. Jordan at Mink Hollow, thanks for the CULTRA props! The best aid stations all day, I told everyone of you that and I wasn’t lying. You all were the best because I am a huge aid station kudos slut but also because I am a high maintenance runner. Every time one of you were like “you look great” externally I was “you lie” but internally I was like “oh I need to hear that so much today.” Thanks for letting me be vulnerable AF and taking care of my fragile ego. Mostly thanks for keeping me smiling.

My stomach was rock solid all day long- did four scoops of Skratch in my pack for every 50 ounces of water, ate six packs of Clif Bloks, ten Roctane gels and supplemented all that with Coke, pickle juice, salty potatoes, bacon and potato chips. Did 300-350 calories an hour without fail, drank those 50 oz every two and a half hours or so.

But after ten hours straight of drinking strawberry Skratch I was ready to just drink water so I switched over to that and started on the solid aforementioned aid station fare. Salt, sugar, caffeine. Over and over. It does a body good. At ultras.

Tom pulled away from me on the descent from Silver Hollow down to Warner Creek- I tried my best to stick with him but he was strong. I caught back up to Scott at the creek, he was moving pretty well and he was locked in with another runner, I hit the flat and then the climb up Carl Mountain and felt fantastic after switching back to vert legs, passing four or five runners here. 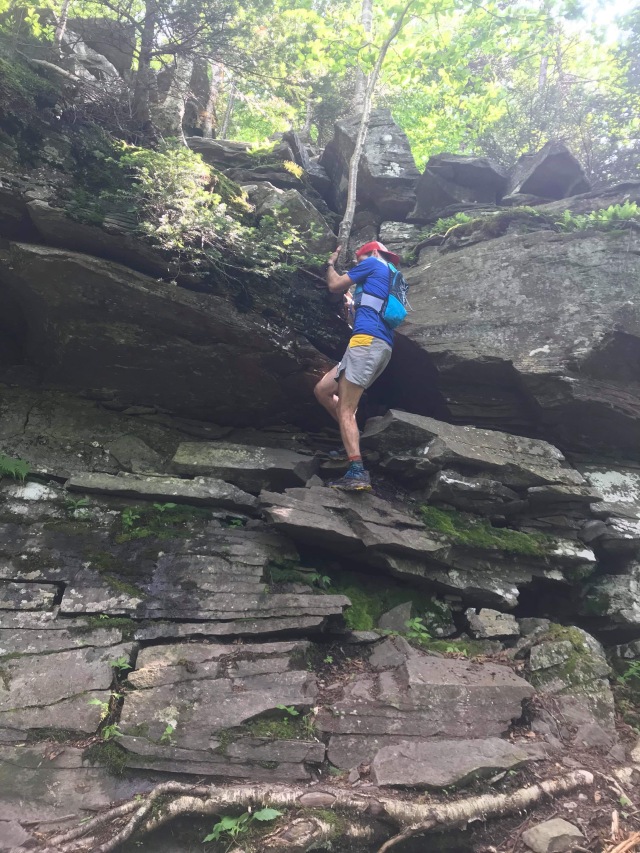 I finally caught up to Tom around Willow aid station, the last of the day. All I had to do was a mellow two mile flattish section then we hit the fire tower and descend, descend, descend. I wanna say it’s like 2.5 miles and drops like almost 2000 feet. As bad as I felt I did really well on this section, passing another few runners before summiting the peak and dropping- Tom pulled away ferociously and would put four minutes on me to the finish.

I did not have to take out that headlamp, finishing with about ten minutes of daylight left. 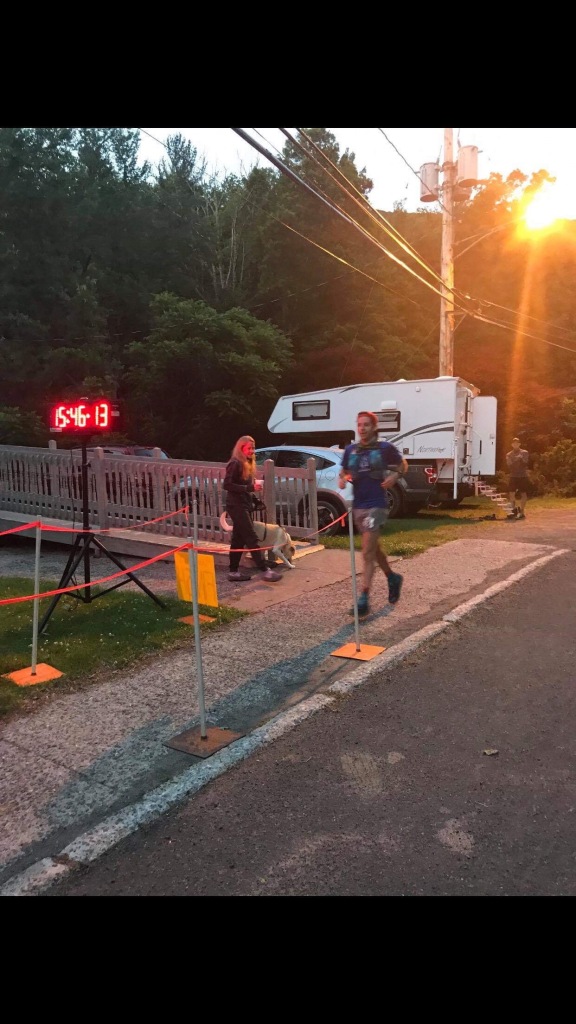 I gotta publicly thank Tom for his selflessness and him saving my race, basically shouldering my burden. He could probably tell that I was in a shitty way when he came up on me at mile 29- he was bummed when I said Stacey had dropped so maybe he was like I’m not letting you drop today. Who knows- we’ll get a run in soon and I’ll find out. Sometimes the simple act of running with someone who is familiar makes the day go easier. Dave Walker saved my race here two years ago, basically spending a similar amount of time with me and making sure I got through the sketchy sections unscathed.

So my biggest takeaway from this year’s Manitou’s is this: instead of being discouraged, my experience this weekend has stoked my hunger for even more epic adventures. It’s got me excited to run with folks even more, to dive deeper into this amazing running community not only here in Connecticut but the whole Northeast. The ADKs, the Whites, the Greens, fucking epic-ass Maine, more Catskills, more Berkshires and Taconics, all the blue blazes, yucky traprock, some Dirty Jerz and especially my home state of PA, just more more more.

1 Response to The 2019 Manitou’s Revenge Race Report: I Can’t Do This Alone