So I started making my own Gu at home, it was getting super-expensive to keep buying a case every 2-3 weeks considering the fact that I now have to bring like 10-15 of them on runs upward of 4 hours.

Here’s what you need (all energy gels follow a simple formula):

– Maltodextrin (a complex carb that acts like a simple sugar, breaks down quickly in you and is converted to energy faster than other complex carbs)

I found some bulk Maltodextrin (the main ingredient in energy gels) and that’s pretty much the most important ingredient (it’s not that easy to find, I got mine here: Bulk Foods Maltodextrin

Get a thing of lemonade (or cherry or lime or whatever flavor you like- I chose lemon because it tastes more and more neutral to me later in the run for some reason). You know, one of these: 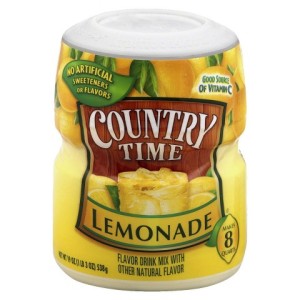 This is the all-important fructose component (a simple sugar) that can also be substituted for dextrose or glucose, if you can find those.

– water (to combine all those powders and make it “gel”, for lack of a better term)

– a Gu or Hammer Flask (see below)

Start with a ratio of ~4 parts Malto to 1 part simple sugar (for my last “batch” it was a 4.4 to 1 ratio), basically 22 tablespoons (330 grams) of maltodextrin to 75 grams (5 tbsp) of powdered lemonade. This much makes about 8 ounces after water is added.

Mix them together (dry) in a saucepan, then add a half-teaspoon of sea salt. Mix again really well. Turn your burner on to medium low heat (I have a gas stove, they’re far superior to electric) and put the saucepan on the burner.

Then add water a tablespoon at a time while stirring with a whisk- you want it to get to the consistency of… well, Gu (or ClifShot or Hammer or whatever you usually eat on runs).

– If you add too much water and it becomes soupy, don’t worry- you just made homemade Gatorade. I did this the first time I attempted this and I had a 700-calorie sports drink that I brought on a run and it was fine, just add cold water and shake it up.

Don’t let it boil. You want it to get warm enough to where the water can be absorbed. Keep stirring until no lumps are left.

Turn off the heat. Move it to an empty burner. Stir it another 10-15 seconds or so.

Leave it alone for 20-30 minutes. There will be a film on top after it rests, you can stir it back into the Gu. Let it sit another few minutes.

Then, transfer it to something that

a) can hold it

b) you can squeeze it into your mouth while running

c) is not too big

Okay, that’s about it. I’m going to try some other flavors and post those later this week.